Play games and review for the earth science regents!

Have fun, learn and help get that grade you deserve on your regents.

1. The same substance always has the same density

4. Water expands when it freezes

5. Most changes are cyclic (e.g.: lunar cycles, tides and the seasons)

7. The true shape of the Earth is an Oblate Spheroid, but from space it looks like a sphere.

8. The best model of the Earth is a sphere (oblate spheroid)

9. The altitude of Polaris equals your latitude

10. To determine the earth's circumference, the altitude of the sun is needed at two locations

13. Longitude is based on observations of the sun (star angles)

14. Use the reference tables

15. The closer the isolines (contour-isobar-isotherms-) are the steeper the slope or gradient

19. The moon has phases because of the angle at which we view it (remember though that half is always lit)

20. Planets appear to go backwards (retrograde) as the earth passes them in space

24. Equator always has 12 hours of day-light

25. The lower the altitude of the sun, the longer the shadow it casts

26. Foucault's pendulum and the Coriolis effect prove the earth rotates

27. Earth is closer to the sun in the winter

28. The closer the planet is to the sun the higher it's velocity

29. The further the planet is from the sun, the slower its velocity.

30. The sun is one foci on an ellipse. There is nothing at the other foci.

32. The half-life of a radioactive element can't be changed

33. Ocean crust is thin and made of basalt

34. Continental crust is thick and made of granite

35. Energy moves from source to sink: high to low

39. Air moves clockwise and outward around a high (the clock is high on the wall)

40. Air moves counterclockwise and inward around a low (the counter is low to the ground)

42. Hottest part of the year is in July

47. Highs are cool and dry; lows are warm and wet

48. Wind is due to air pressure differences

50. Wind is named from the direction that it is coming from

52. The closer the air temperature is to the dew point the greater the chance for precipitation

53. Weather moves from west to east in the United States 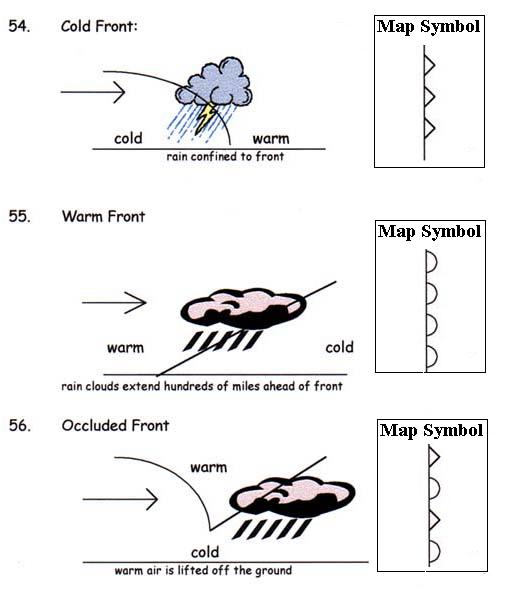 58. Porosity does not depend on particle size

63. Apparent diameter of objects (sun, moon) gets larger when the object is closer to Earth

70. Streams are the number one agent of erosion

72. Velocity is fastest on the out side of meander bend

73. Heavy, round and dense particle settle out first Graded

76. Sedimentary rocks - strata - flat layers - most likely to have fossils

88. Intrusion and faults are younger than the rock they are in

92. When in doubt, see if the reference tables will help

97. When a rock is broken into smaller pieces, surface area increases and weathering rate increases

98. Use complete sentences for the free responses

99. Be familiar with this chart:

100. USE THE REFERENCE TABLES!

102. In part II, choose groups A and B (rocks & minerals, and plate tectonics)

103. Take your time. You have three hours to do the exam

105. Draw diagrams to help you visualize the questions asked - where possible

106. Use a straight-edge to read graphics, to mark points on a graph and to measure distances.

107. If certain words cause confusion, cross them out and substitute a different word, then read the question again (example: substitute the word "false" for "not true")

109. Read all choices before deciding on an answer, sometimes a question has a good and a better answer. Always choose the best answer.

110. If you are not sure of an answer, try to eliminate choices that you think are clearly wrong and narrow down your choices. Then make your most careful guess.

112. Check your test a second time, but only change an answer if you find an obvious mistake. Your first choice is usually correct.

113. Look up formulas, even if you think you know them. Substitute information from the question into the formula. Most are on the back page of the reference tables.

114. Skip over hard questions that are stumping you. Go back to them later. Something else in the test may give you a clue to the harder problems.

115. Have a healthy meal for dinner the night before.

116. A good night sleep is as important as the above items.

117. Relax-you've seen all this stuff before.

Did you Know: John Glenn was the first American to orbit the earth in space.